My life is so much easier now that Hermione is cool.

Acting was so much fun for me growing up. I got to fly, dye my hair funny colors, meet lots of new people, play dress-up and pretend all the time, and read everything. Here are some of my favorite memories:

I played Amanda Thripp, the unfortunate girl who gets thrown over the fence by her pigtails. 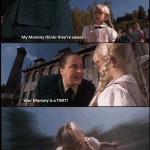 
Trivia: Pam Ferris (the actress who played Ms. Trunchbull) was actually my favorite out of all of the wonderful adults that we got to work with on set! I love the look of surprise on kids’ faces when they ask me if I was afraid of the Trunchbull.

I played Margaret, the girl with the red corkscrew girls who just wants to catch Dennis’ eye.


Trivia: I originally auditioned for the role of Gina, the tomboy. They had me read for Margaret after! I had a lot of fun pretending to be a girly-girl for once.

Trivia: Although Hallie Kate Eisenberg (Vanessa) and I never shared any scenes, we were good friends on set.

The hardest scene for me to film was the bicycle scene; I nearly gave my mom a heart attack! To this day, I’m still not very good on a bike.

“The most hilarious thing I've watched in a while. YouTube gold. Gold I tell you! GOLD!” – a fan, regarding my YouTube channel.

“I pitch her to casting with complete confidence that she will blow them away.” – childhood agent

“My life is so much easier now that Hermione is cool.”